$150 Millions of Liquidation in Ethereum Market Cap After The Merge

What Disruptions Happened In The Crypto Market? 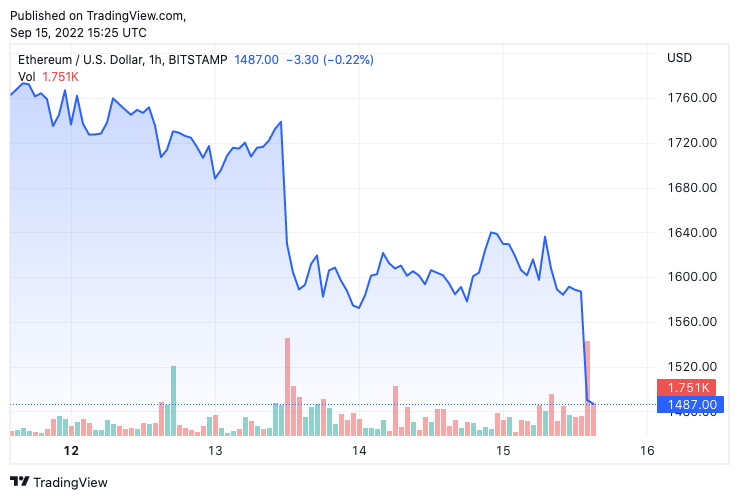 According to a Trading View analytic report, Ethereum turned down $1500. That now stands at $1487 as of press time.

Over $60 million in ETH liquidated in less than an hour, creating downward pressure on the rest of the altcoin market. While liquidation has exceeded $150 million in the last 24 hours.

What Did The Different Exchanges Say About The Liquidations?

As per Coinanalyze in their 24-hour report, around $77 million in liquidations occurred on OKEx and FTX revealed the same downward story but less than that of OKEx, which is a $40 million liquidation.

Although the majority of liquidations were long at $98.6 million, the real market observed only $48.5 million in shorts.

The percentage of altcoin assets disclosed is not large, but it is significant. Ethereum, for example, fell 7.5% the day after the Ethereum Merge until the evening of September 15, 2022.

What Are The Causes Of Liquidations After The Ethereum Merge?

Many crypto-analytics magazines and exchanges reported a massive drop in the altcoin market following the Merge, particularly for the major altcoin Ethereum. Here is the reason why it happened.

This is due to the consequence of speculation surrounding the merger. Some said security would degrade after the conversion of the chain from a Proof of Work to a Proof of Stake mechanism.

There is a long period of uncertainty or volatility for the broader crypto market. It means no one knows whether the conversion will be successful or not. So several crypto experts rely on different theories, either positive or negative.

What Are The Latest Updates On Ethereum Now?

The total market cap of Ethereum is $183.071 billion and the available total coins in the global market are 122.379 million.

Cryptocurrency price: Here is the current price of Dogecoin, Bitcoin, and Ethereum.

Singapore’s Biggest Bank Gets Building in The Sandbox

The White House has released a Cryptocurrency framework

This site uses Akismet to reduce spam. Learn how your comment data is processed.

What is a sandbox? Know this before buying Sandbox Coins

What is bitcoin and how does it work? – Beginner Guide

This website uses cookies to improve your experience while you navigate through the website. Out of these, the cookies that are categorized as necessary are stored on your browser as they are essential for the working of basic functionalities of the website. We also use third-party cookies that help us analyze and understand how you use this website. These cookies will be stored in your browser only with your consent. You also have the option to opt-out of these cookies. But opting out of some of these cookies may affect your browsing experience.
Necessary Always Enabled
Necessary cookies are absolutely essential for the website to function properly. These cookies ensure basic functionalities and security features of the website, anonymously.
Functional
Functional cookies help to perform certain functionalities like sharing the content of the website on social media platforms, collect feedbacks, and other third-party features.
Performance
Performance cookies are used to understand and analyze the key performance indexes of the website which helps in delivering a better user experience for the visitors.
Analytics
Analytical cookies are used to understand how visitors interact with the website. These cookies help provide information on metrics the number of visitors, bounce rate, traffic source, etc.
Advertisement
Advertisement cookies are used to provide visitors with relevant ads and marketing campaigns. These cookies track visitors across websites and collect information to provide customized ads.
Others
Other uncategorized cookies are those that are being analyzed and have not been classified into a category as yet.
SAVE & ACCEPT